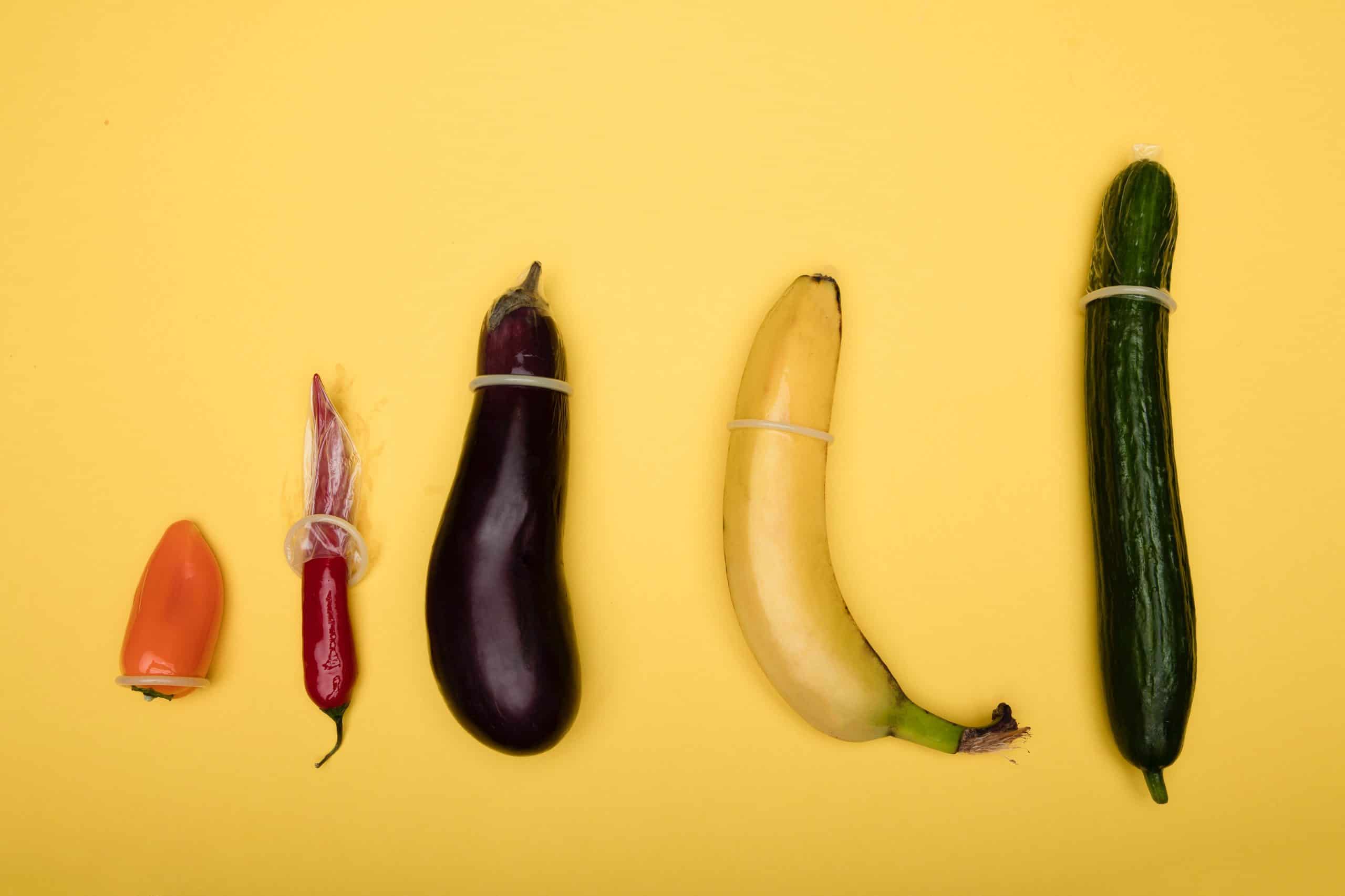 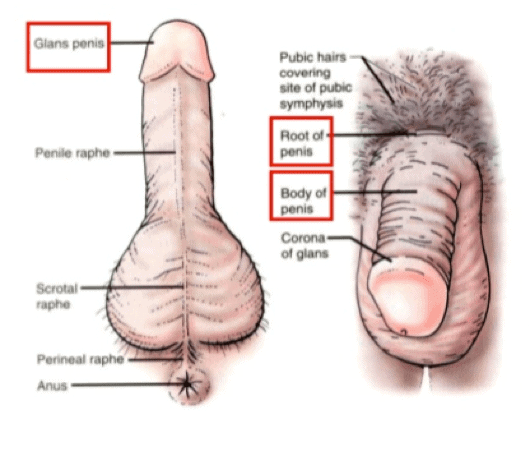 The male penis consists of the root (or base), shaft (or body), and the glans (the tip). The glans are typically the most sensitive part of the penis due to its thousands of nerve endings. The nerve endings typically feel extremely good to touch either with a hand, tongue, sex toy, vaginal canal, or anything else your imagination might allow you to think up. Some males have what is called a foreskin protecting their glans.

The foreskin is freestanding skin that moves back when the penis is erect. Parents choose to get their child circumcised for various reasons – religious, cleanliness, etc., and they usually have it done in the child’s infancy. Circumcision is the removal of the foreskin from the penis. With a  57% rate of circumcision in the male population within the United States, circumcisions are most common in the United States. Comparatively, Canada’s rate of circumcision is less at about 17%, England is about 5%, and the rest of the world is less than 5%. (Based on percentages found during research in 2018 when this tip was written.)

Circumcisions have their pros and cons. As stated above, religion may play a role in the decision to circumcise. Circumcised penises can be easier to keep clean and therefore show lower rates of sexually transmitted infections (STI’s) or other infections. With that said, the foreskin serves as a protective barrier to the glans. Uncircumcised men report a higher sensitivity in their glans and therefore increased levels of sexual satisfaction.

Many circumstances can affect penis length when it is flaccid and erect including room temperature and therefore whether the cremaster muscle has contracted and pulled the scrotum closer to the body or not. Other factors that affect penis length are state of arousal, time of day, or frequency of sexual activity.  A myth that we can debunk for you is that there is not strong statistical data showing a relationship between other body parts and penis size, including male height. There are also no statistical data showing a relationship between race and penis size. The averages given above were taken from a generalized male human population.

As we explore more of the outside of cisgender male genitalia, we have to discuss the male scrotum, which contains the testes. The scrotum typically connects to the root of the penis. Like women’s breasts, one side of the cisgender male’s scrotum is typically larger than the other. The ideal scrotum temperature for sperm production is 5-6 degrees below body temperature. The scrotum will move up and down slightly by using the cremaster muscle to keep the sperm at a healthy temperature. The cremaster muscle is involuntary, contracting with temperature changes, arousal, or fear. During sexual stimulation or experiences of fear or anxiety, the cremaster muscle helps protect the testes from injury by drawing the scrotum closer to the body. The scrotum also contains nerve endings that may feel good to the male if rubbed sensually. 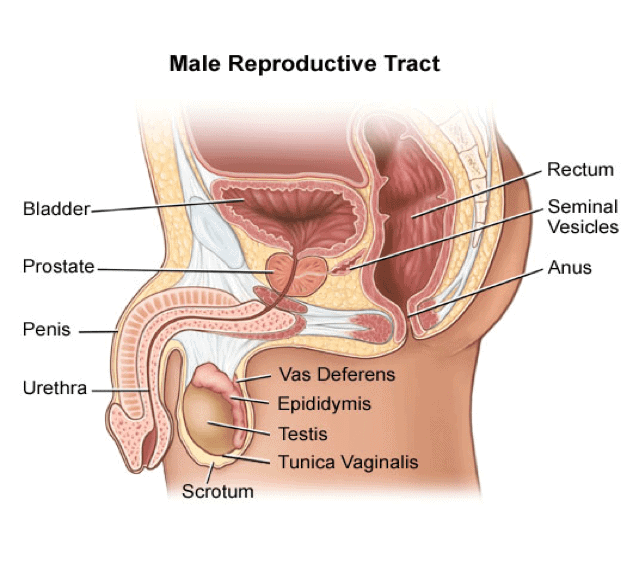 On the inside, the penis contains the urethra, which passes both urine and semen. Contrary to what some may think, the penis does not contain any bone or muscle. What makes the penis erect is the corpora cavernosa, cylinders of spongy tissue that fill with blood stiffening the penis during sexual arousal. If the male is not aroused, the corpora cavernosa can still fill with blood (i.e. “morning wood” or sporadic times of the day) this keeps the tissue alive and well by giving the penis a healthy supply of oxygen.

Within the inside of the scrotum, a male has his testes and epididymis. The epididymis produces the sperm (reproductive cells) and the testes store it. Depending on body temperature, the scrotum moves up and down to keep the sperm viable during storage. In the process of ejaculation, the sperm move through the vas deferens (small tubes connected from the testes to the urethra) where they mix with a sugary substance produced by the seminal vesicle and prostate gland. The sugary substance gives the sperm energy to swim to the female’s ovum, while also protecting it from the vaginal canal’s acidity. At this point, the male now has what is called semen, which is the thick, milky-looking substance that comes out when ejaculating. The semen then goes into the urethra and out of the tip of the penis.

Sperm can sometimes get stuck around the seminal vesicle, as well as in the urethra. Therefore, the transparent substance that is produced as an erection first happens (precum) may contain sperm. Precum also contains substances that protect the sperm from the vaginal canal’s acidity allowing the sperm in precum to make it to the female’s ovum, which may cause pregnancy.

If the male decides he does not want children in the future, he can have what is called a vasectomy. A vasectomy consists of the doctor cutting the vas deferens thereby making it impossible for the sperm to travel from the testes to the urethra and out of the penis. Due to the continued production of the milky substance by the seminal vesicle, the male will continue to produce ejaculate when he orgasms. The ejaculate will not contain sperm, however.

Unlike most males’ ability to move their body parts when they want to, an erection is an involuntary bodily reaction where spinal reflexes are activated. Within the male’s spinal column lies the sacrum. Through direct stimulation of the penis, the touch receptors send a message to the sacrum, which then responds by communicating with the corpora cavernosa.  When a male has a sexual fantasy or sees someone they find attractive, the neural senses of touch are not in use. Instead, the brain is sending the message to the corpora cavernosa. Both instances- physical touch and cognitions – trigger the spinal reflexes by the sacrum that cause an erection.

You now know your cisgendered male genitalia; go start having fun! Explore how your spinal reflexes are activated and see what you notice. If you have a person hold your scrotum, can you feel it move closer to your body? Where on your glands or shaft feels best? As you become erect, do you feel the blood rush to your corpora cavernosa? During sexual arousal, you can start paying attention to your body, while staying out of your head.

We have tried our hardest to be as thorough as possible in the description of the cisgender male genitalia, but you still may have questions or think you may need sex therapy or individual therapy feel free to give us a call at 267-495-4951; we’d love to be able to answer any questions or concerns that you may have. We are also currently offering online sex therapy if you fear coming to an office or live further away!