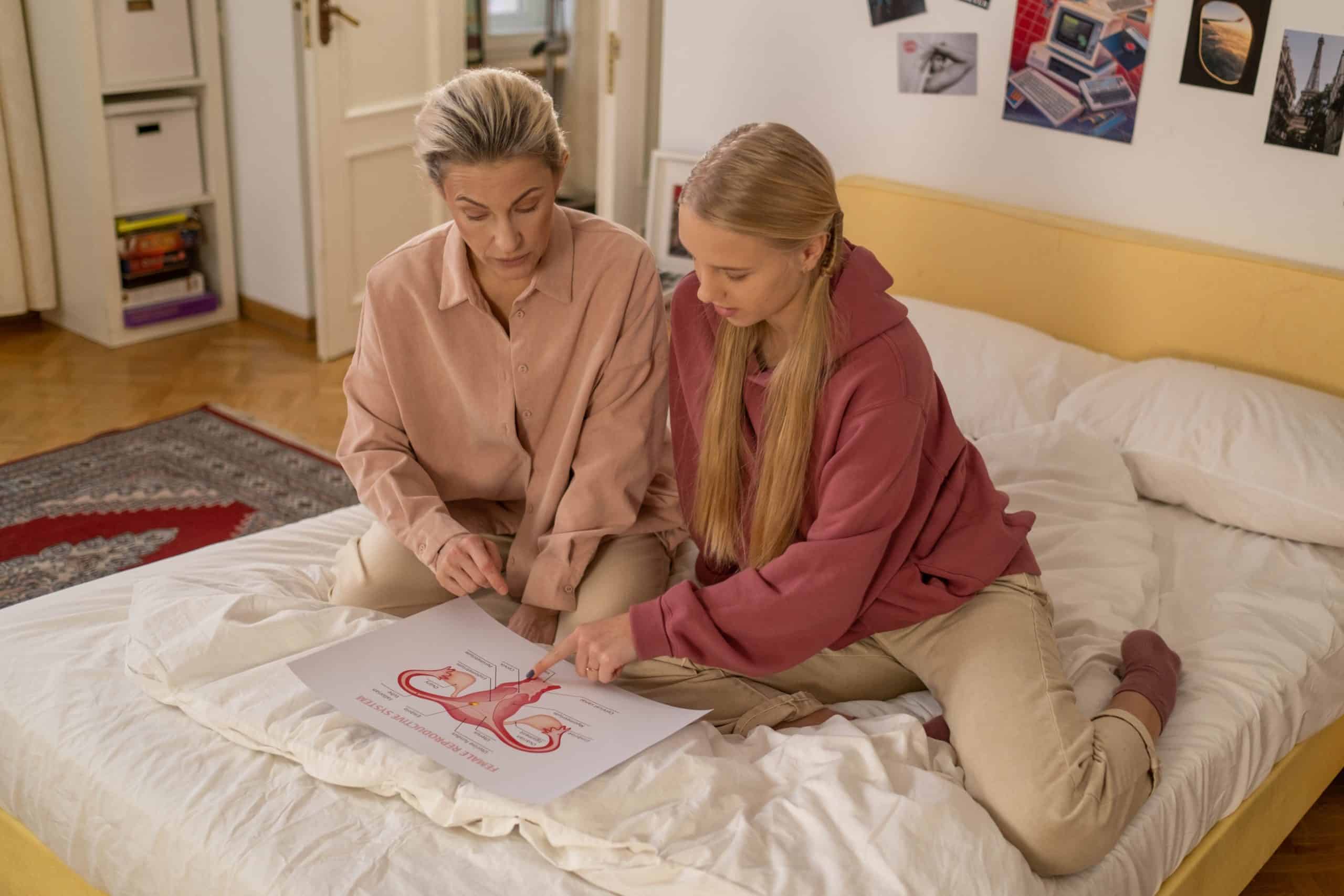 Cisgendered Female Genitalia: Going from Vagina to Vulva to Vestibule

You may think that cis-gendered female genitalia is complicated. But, with a little bit of education, they’re beautifully simplistic. 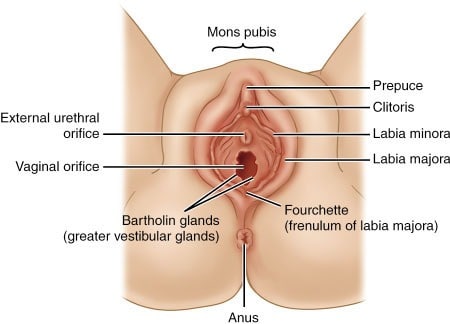 The cisgendered external female genitalia is referred to as the pudendum, or, more commonly, the vulva. The mons pubis is the upper, fatty part of a cisgender woman’s genitalia offering protection. It is found above the clitoris and contains pubic hair. In some cultures, it is common to remove the hair either by shaving, waxing, or laser hair removal. A female’s preference for hair can be based on the feeling, cleanliness, looks, and possible partner preference, similar to why people choose to shave their legs, armpits, facial hair, etc. Pubic hair offers protection in many forms. It serves as a barrier to many bacteria and viruses. Pubic hair can help protect sensitive skin and help control moisture levels. Pubic hair also contains nerve endings that may increase a female’s sexual sensation in her mons pubis area. While offering positive attributes, some females find pubic hair to be itchy, messy (especially when menstruating), sweat-inducing, and more susceptible to pubic lice.

Further down the cisgendered female genitalia is the vestibule containing the clitoris, urethra, introitus, and labia majora and minora. The vestibule contains nerve endings that help to arouse the female. Interestingly, the clitoris is the only body part that serves no other purpose other than sexual satisfaction. The clitoris is made up of the shaft (the body), the glans (the tip), and the clitoral hood. It is made from the same parts as the male penis. There are thousands of nerve endings in the clitoris that, when stimulated, help the female to become aroused. For the majority of females (about 70%), the only way they can orgasm is through clitoral stimulation.

Stimulation of the clitoris may occur at times when the female does not want the stimulation- wearing tighter clothes, during sexual assault or rape, or sitting in certain positions. Due to the many nerve endings, a female may have an unwanted clitoral reaction that can not be controlled. Such reactions may be sudden lubrication, arousing sensations of genitalia, or orgasm. These reactions are your sensory receptor cells reacting to a stimulus and sending a message to your brain. Each sensory receptor cell has a specific pathway in the brain. Your brain is merely responding to the message that came from the specific pathway and then responding in the way that it always does based on that pathway.

The Urethra, Introitus, and Hymen

Under the clitoris, the female has a urethra. The urethra allows the female to urinate, as it is connected to the female’s bladder. It is important for a female to urinate after sexual activity to help prevent yeast infections or urinary tract infections. Beneath the urethra is the female’s introitus (vaginal opening). Most females are born with a hymen, which covers the introitus until stretched out. A female can impact her hymen in many different ways: sex, using tampons, getting fingered, falling down, sports activity, getting hit in the genitalia, etc.

Helping to protect the clitoris, urethra, and introitus is the labia minora and labia majora. The labia minora are usually smaller flaps of skin that tend to be hairless. They surround the vestibule and contain nerve endings that may feel good when touched. On the outside of the labia, minora are the labia majora. They too act as a protective barrier to the vestibule. Labia majora tend to be bigger flaps of skin and are usually covered in pubic hair. When infections occur, such as yeast infections, a female’s labia may swell, itch, or turn red. Every female’s labia look different. Some females have larger labia minora than the majora. Some females have labia that touch together and close, while others have a gap between them. Whatever your labia look like, know that they are one of a kind and beautiful. 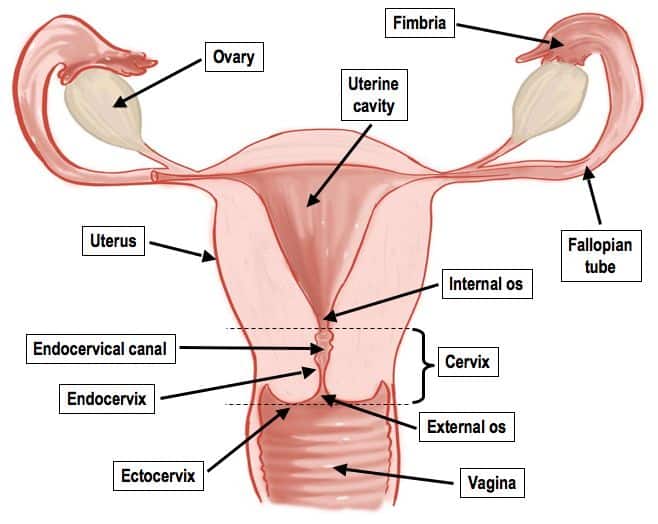 As mentioned above, most people refer to the cisgender female genitalia as a whole as “the vagina,” the vaginal canal is actually only made up of the space between the introitus and the cervix. After insertion through the introitus, the object moves back and forth in the vaginal canal hitting nerve endings that may feel arousing. During arousal, the vaginal canal becomes engorged with blood and can expand. Females with sexual dysfunctions such as genito-pelvis pain/penetration disorder are most likely experiencing pain in their vaginal canal. The vaginal canal is also the body part that is being touched during sexual activity, a gynecological exam, and it is where the tampon or vaginal ring stays when in place.

How deep is the vagina?

The vaginal canal also contains the female g-spot, an area that contains a high amount of nerve endings. The g-spot can be found typically about 1.5 inches into the vaginal canal on the mons pubis side. The g-spot tends to be rougher in texture and about the size of a pen cap in circumference.

Past the vaginal canal is the cervix. This is the lower end of the uterus. The cervix contains two os, which is where the IUD birth control method is implanted. During a gynecological exam, the healthcare provider will take a pap smear from your cervix, which can be uncomfortable for some females. The position of the cervix will vary for each female. Knowing how the cervix is positioned will help to reduce pain during penetration, as it may hurt if the cervix is hit by a finger, penis, or other objects. Adjustments to positioning and depth can be made to avoid hitting the cervix.

Above the cervix is the uterus, which is a hollow, muscular organ where a fertilized egg is implanted for the development of the fetus. The uterus has three major layers: the endometrium, which is the innermost layer containing blood vessels and glands; the myometrium, which is the muscular second layer that allows flexibility and strength and where contractions come from during childbirth; and the perimetrium, which is the external cover. During sexual activity, a gynecological exam, or wearing a tampon or vaginal ring, your uterus is not touched as it is not part of the vaginal canal.

Connected to the uterus are the two fallopian tubes, one on the left side and one on the right side. They are connected to the two almond-shaped organs called the ovaries. The ovaries are where the eggs are produced and kept until ready for maturation. Unlike males, females do not continually produce new eggs. Instead, they are born with about 2 million eggs. At maturation, the female is left with about 400,000 viable eggs. From puberty to menopause, about 400-500 eggs will go through the maturation process. If a female becomes pregnant, the mature egg will become fertilized and implant into the uterus. The ovaries also produce estrogen and progesterone, which are hormones that are involved in puberty, menstruation, childbirth, and menopause. 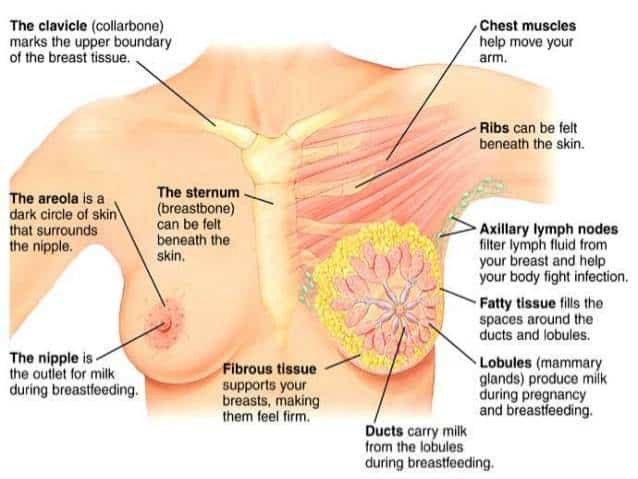 The breast contains the mammary glands, which are found in the lobes. They secrete milk. The female-only produces milk when a hormone called prolactin activates its production around the time of childbirth. If the mother chooses to breastfeed her child, the milk is carried through the ducts to the nipple and out. If a mother chooses not to breastfeed her child, the production of milk ceases. Here is where masses can be detected for cancerous tumors and should be checked regularly.

The outer breast has the female’s nipple and areola. Both have nerve endings that can be used for sexual arousal. For some women, nipple arousal can lead to orgasm. Each female’s color and size of the areola and nipple varies. The nerve endings in the areola can help promote stimulation of the Bartholin gland for lubrication.

If you have a partner, have them explore your body (or you explore theirs) by labeling the body parts as you go. See what feels good for you while your partner touches you in all your erogenous zones. Lastly, practice using anatomically correct verbiage to describe your cisgendered female genitalia. Find at least one opportunity this week to use the appropriate anatomical words, whether in your next healthcare provider’s appointment, within a conversation with a good friend, etc. You’ll find people will understand you better, specifically your partner you’ve just explored your body with, and your healthcare provider. You will also feel more empowered and confident!

Do you still have questions? Give us a call to talk to one of our sex therapy experts in Philadelphia at 267-495-4951, or fill out the form below.